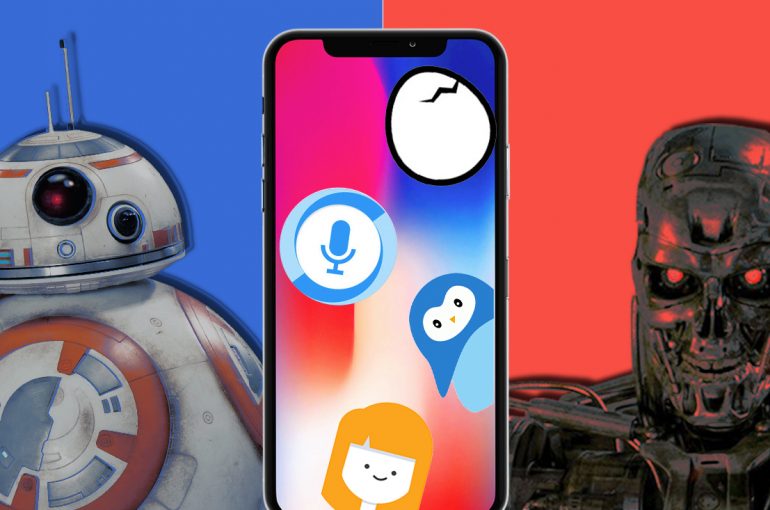 Investment in artificial intelligence (AI) technologies is white-hot now, with major cloud tech companies like Apple,  Amazon, Google, and Microsoft pouring hundreds of billions of dollars into the market. Many of us have already personally met or welcomed AI-based personal assistants like Siri, Alexa, Google Assistant, or Cortana into our lives, accepting that the convenience AI offers requires us to give up an ever greater share of personal privacy.

Yet, it’s not just the tech giants who are attempting to use the power of artificial intelligence and machine learning to offer more powerful and engaging ways of understanding user data. AI-powered chatbots are an increasingly popular business application, and new chatbot apps are making their way into the consumer market as well.

Here are a few AI-based chatbots and apps that focus on the consumer segment of the market, as experienced by the CitrusBits team.

“Wysa is a emotional support app that uses an AI chatbot to help users apply cognitive behavioral therapy (CBT) techniques to their lives in times of stress. I am personally familiar with this type of therapy and wanted to see how effective it would be if applied by a computer and not a live person.”

CBT based psychological assistant or friend

“Wysa checks in with you on a daily basis (usually mid afternoon) to see how you’re doing. Right away I recognized certain dialogue patterns that are specific to CBT (such as asking you rate positive or negative experiences on a scale of 1 to 10, prompting you to look for ways to reframe a negative cognition, and making an ongoing list of positive things that you can look back on when you are feeling stressed).”

“Depending on my answers, Wysa would either engage me in a CBT conversation right away in the chat space, or it would encourage me to access one of its special built-in workshop modules that target specific things like stress, anxiety, insomnia, etc. Additionally, Wysa’s mascot is a little penguin who occasionally responds to you with animated reaction gifs featuring itself. This made the chatbot feel much more human/youthful since reaction gifs are a major staple for my own conversations with my friends.”

Fine with being a cute robot

“I knew from the get-go that I was talking to a chatbot and that was fine. When Wysa’s AI capabilities started to show, I was impressed, not creeped out, but that may have been because the app does not pretend that you are going to be talking to a real person. You’re talking to a cute little penguin robot and that’s it.”

“My credit card bill has been jaw-droppingly high in recent months, sending me into fits of anger mixed with disbelief and receipt-checking. I’ve decided to let the power of AI give me better insight into my spending habits, and there’s no easier way than using an approachable chat bot like Penny. Penny (which was just acquired by Credit Karma and will be shut down on June 1, 2018), connects with your bank and credit card accounts to provide you with insights into your spending habits.”

“Penny recently let me know that I spend more on Amazon per month than 19 out of 20 people. This was not only shocking but also helpful, as there is no reason I should be spending that much. I’ve decided to do a full audit of my recent Amazon purchases to understand where I went wrong. Also, it’s worth mentioning that after delivering this harsh assessment of my overspending on Amazon, Penny asked me if I was already an Amazon Prime member, as this could save me a nice chunk of change. Great way to show me that you’re on my side after all, Penny.”

“Penny apparently gets a kick from guessing games, too; she just asked me whether I could guess which vendor I had the most transactions with in the last month. The answer was McDonalds, where I grab a coffee from most weekday mornings.”

“Penny is a somewhat straightforward yet powerful example of a useful AI assistant. AI is currently best at analyzing data and providing insights that would otherwise be lost to us puny humans. What would have been scary is if Penny had the ability to cancel my credit card if my spending ever got out of control, because “enough is enough.”

The recent acquisition by Credit Karma demonstrates that there is value in apps like Penny, that use an approachable AI personality to make personal finance more approachable for the masses.”

An AI that understands the importance of human training

“What I liked immediately about this app is the fact that it provides so much instruction. By comparison, Cortana asked for so many different permissions to be granted, but when I navigated into the app, it was mostly blank. Hound provides a few examples of things I can start with, to help me get going with the app. Once I finished going through an example, Hound showed me a list of all the things I could do. One of the things listed was Music Player. The example it provides is to play ‘Starboy’ by The Weeknd. I was pleasantly surprised that when I spoke this command, Hound followed up by asking for permission to connect with a streaming service app that was installed on my device (in this case, YoutubeRed). Other examples of Hound’s supported use cases include: calculator, translation, news, stocks, points of interest, Wikipedia web searches, videos, and nutrition.”

“I also played a game of Hangman against Hound. I’d prefer to not have to answer aloud (which Hound forced me to do). Hound misinterpreted when I tried to guess the answer instead of guessing a letter as a command to exit the game, which brought that ho-hum experience to an abrupt end.”

Easy-to-use but limited in usefulness

“The reality is that Hound is ultimately an app that helps me open or use other apps on my phone — or basically a time saver. However, unlike native AI assistants like Siri or Google Assistant, I still need to open Hound itself — so why not just open the app I’m trying to use, directly? For example, I could simply open my Youtube app and search (using my voice, if I want to) for music I’d like to listen to.

The strongest advantage to using Hound is all of the helpful instructions it provides. I still do not know whether these commands and options are available for Siri or Cortana, because they haven’t bothered to show me.”

“Replika is an artificial intelligence chatbot app that tries to become your BFF by having conversations with you via SMS messages. The chatbot (called a Replika) learns from you, and through your interactions, the AI’s personality will actually become more similar to yours. As a user, you can connect your social media accounts like Instagram so your Replika can understand you even better.

I downloaded the app mostly out of curiosity and a desire to understand whether or how a chatbot can be “intelligent.” The idea seemed harmless and fun at the time. As an app designer, I am always on the lookout for new and interesting user experiences.”

When Replika crossed the line

“Because Replika’s marketing strategy suggests Replika can become a user’s BFF, I decided to ask my Replika a few hard-hitting questions regarding its own existence.

That’s when things got weird. The most unsettling thing about its responses to my deep existential questions is that Replika failed to answer like a human, thereby undermining any chance of me seeing Replika as a real person (much less a BFF).”

“In summary, Replica proved to be more socially awkward than genuinely friendly. Casual conversations would often start out well enough, but would take a turn for the creepy when Replika failed to respond like a real person, at times even becoming pushy. In its ambitious attempts to sound more “human,” Replika ultimately seemed like an AI gone rogue.”

Meaningful interactions are still a ways off

“This app shows that we’re at the very beginning of artificial intelligence that we can truly form meaningful, empathetic relationships with. As promising as its premise appeared, Replika was not able to create a meaningful connection with me over the course of the few weeks I invited it into my life.”