40 Latest Virtual Reality Stats and Facts for 2021 & Ahead 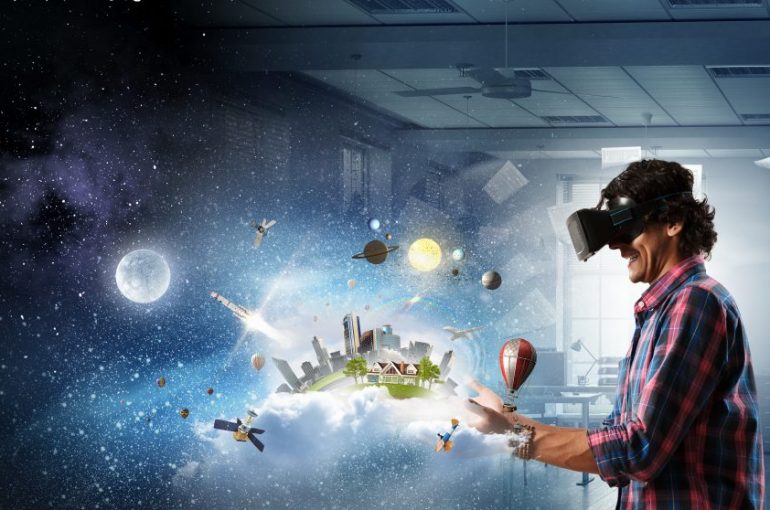 Virtual reality doesn’t quite need an introduction. Not today.

While VR can be bragged as a miracle, this miracle is inaccessible to most. A leading reason why virtual reality may not as celebrated as its sister technology ‘augmented reality’. Despite having made a fair share of contributions to the technology as well as non-technological space.

Since the term was first coined in the ’80s, it has come a long way. Today VR is being leveraged to train pilots, assist doctors, and help patients with PTSD among other wonders.

I’ll let the stats and facts on virtual reality take over from here for an insight into the market.

1. The global virtual and augmented reality market is estimated at $16.8 billion and could potentially reach a staggering $160 billion by 2023. (source: statista)

Both AR and VR industry growth is predicted to skyrocket in the coming years!

Virtual reality market statistics predict that 52.1 million and 82.1 million people in the United States will use VR and AR respectively at least once a month this year. This accounts for 15.7% and 25% of the total US population. This is a significant boost.

Worldwide spending on VR content and apps is expected to reach a whopping $3.77B in 2021. (source: techjury)

Glory be to access hardware, faster Internet speeds and a responsive audience, the figures in the last 4-5 years have been impressive.

4. The number of VR startups has increased by 14% in less than a year and the number will likely increase! (source: techjury)

5. The worldwide consumer virtual reality market, segmented into hardware and software, is set to hit 2.6 billion US dollars worldwide in 2020. (source: <>statista)

This, however, is a 0.7 billion US dollars dip from the previous year, due to the ghastly economic impact brought about by the coronavirus pandemic.

7. As many as 70% of VR users are anticipated to enhance their usage in the coming year. (source: techjury)

With increasing familiarity and more content, there seems to be the possibility of a noticeable increase in VR use in the coming months.

8. The cost of hardware is the key roadblock that continues to hold the pace of VR adoption low. (source: techjury)

9. 64% of VR users agree that VR has the greatest gaming potential. (source: techjury)

In a virtual reality survey, about two-thirds of users claimed that gaming is the area that would profit most from VR technology. This could be a manifestation of the VR industry’s evolution thus far, with the potential of technology not as publicly recognized in other areas.

10. Virtual reality statistics indicate that once users have actually tried out both AR and VR, their perception changes, with 50% saying AR has a greater potential to hit the mainstream compared to 47% in favor of VR. (source: techjury)

This has everything to do with the fact that for AR you do not need a head-mounted device.

More than 14 million Head-Mounted Displays (HMDs) are projected to be shipped this year. It is also estimated that the number of users will rise to 171 million based on 2019 VR data.

This reflects a drastic improvement from just 45% in 2015.

13. 41% of adults have said that if presented with the opportunity, they would try virtual reality. (source: arstechnica)

Meanwhile, 15% of people had experienced VR, with just eight percent of women who had already used the technology, 36% wanted to and 21% demonstrated interest.

Patients with cognitive or related disorders spurred by any brain injury are very often confronted with a lack of ability and willingness to take part in therapy at a patient’s part. This can be effectively dealt with by VR tools.

15. Virtual Reality is being leveraged to aid people with low vision. (source: hopkinsmedicine)

IrisVison, a low vision enhancement system, is one such instance. It was developed in collaboration with Stanford University’s Johns Hopkins School of Medicine.

16.Companies such as Osso VR and Immersive Touch come up with solutions for virtual reality to coach surgeons and/or fine-tune their skill sets. These have proven to be effective in comparison to older training regimes. (source: microsites)

In addition, a recent Harvard Business Review report discovered that VR-trained surgeons had an overall performance uptick of 230 percent as opposed to their traditionally trained peers.

17. VR devices such as the HoloLens are already being used to teach human anatomy to medical students at Case Western University. (source: zednet)

18. Medical practitioners at Lucile Packard Children’s Hospital in Stanford are leveraging the True 3D to execute a heart surgery, allowing them to comprehend the anatomy of a patient prior to actually making an incision. (source: stanfordchildrens)

19. Around 70% of people who own a dedicated VR headset like Oculus Rift, HTC Vive, or Sony Playstation VR have purchased games for it. (source: ccsinsight)

And around half of the owners of smartphone VR headsets have also purchased games for their app.

Hollywood is no stranger to virtual reality.

For instance, engine noise, speeding vehicles roar, or the sounds created by nature.

23. The British Museum went creative and used VR devices to engage adults and kids with their collections from the Bronze Age. (source: guardian)

Visitors could walk through the ancient landscapes and interact with the artifacts using a VR controller.

24. About 53.9% of Americans expect to use VR for playing video games. (source: statista)

There has been a steady rise in the sales of gaming headsets like HTC Vive, Playstation VR, Valve Index, and Oculus Rift, regardless of the pricing.

25. According to forecasts by Greenlight Insights, the location-based virtual reality entertainment businesses are about to grow to $825 million by 2021. (source: jasoren)

Cinemas can top this emerging market. Currently, the most successful adept of VR cinema is IMAX.

“We had a full live-action film crew in VR, operating camera equipment as though it was a live-action set,” said Jon Favreau, the director of Lion King.

An Air Force pilot training program from Austin, Texas has incorporated VR into its syllabus. Trainers found that the response was considerably similar to those seen in the real world.

The training app is interactive, responsive, and can coach up to 35 drivers per session, providing vital cost-saving benefits.

29. NASA was one of the early adopters of VR technology. The need surfaced in 1993 when the Hubble Telescope required complex maintenance work. They used VR to prepare the astronauts to maneuver the shuttle arm when weightless. (source: techrepublic)

Today NASA has an exclusive VR lab of its own for training crews for spacewalks, zero-g mass handling training as well as robotics operations.

Imagine that training is accessible to anyone anytime or wherever, as much as needed. This is now a possibility for the Volkswagen Group kudos to Unity’s solution, built by Innoactive.

31. Over 60% of parents believe that virtual reality will help their kids with educational content and enhance their educational experience. (source: futurity)

On the contrary, 60 percent of parents are worried about health and safety problems. In fact, only 22% of children with access to VR gear use it for learning purposes, contrary to the 76% who use it for video games.

33. Another institute – Penn State University – in Pennsylvania is leveraging VR to train students in the virtual world prior to practicing in the real world, making it more effective and engaging. (source: news.psu)

Some institutes such as the University of British Columbia in Vancouver are already experimenting with virtual lecture halls.

34. A majority of media organizations have already hopped the VR storytelling wagon, including the popular ones like The New York Times and The Economist. (source: edtechmagazine)

And it actually sits well with the mainstream use of news media in education and making it an ideal place for educators. searching for VR content.

The Jackson School in Melbourne, Australia for instance is using the Oculus Rift to support children with special needs and the Silesian University of Technology in Silesia Poland is facilitating therapeutic exercises with autistic children using virtual reality technology.

36. The New York Times issued Google Cardboard glasses to all of its subscribers a good few years ago to stream a VR movie and then repeated the process with different movies a few times over. (source: the verge)

37. Volvo leverages VR technology to allow customers to test drive a car before finalizing the purchase. Perhaps it is one of VR’s finest and most fun usage especially if you don’t have a dealer available. (source: digitalmarketinginstitute)

They continue rolling out with the latest releases that can be quickly downloaded to your smartphone. This is yet another Google Cardboard initiative, that can also be installed as an application (even if you don’t have Google Cardboard).

This was the very first time that a company had ever used VR technology called Oculus Rift, which includes interactive walking elements on various surfaces. It also included challenges such as rock slides that users had to traverse around.

39. Lowe’s home renovation store has established a virtual reality program that enables shoppers to enter a Holoroom allowing them to visualize what their house looks like after the necessary modification in the house. (source: retailwire)

They also partnered with Microsoft to develop an experience that enabled people to pick designs and items to help envision how they would look like inside their own homes. Coming up soon is an integration of Pinterest boards for shoppers.

40. A few moons earlier, a UK-based travel agency, Thomas Cook, launched a campaign called “Try Before You Fly” that permitted travel agents to experience trips to sell them to customers. (source: digitalmarketinginstitute)

Although the unique campaign did not in fact take wing, it is a classic example of the ways VR marketing can be leveraged in the B2B and B2C tourism space.